Recycling is no longer the answer to cleaning up our world

Only 34% of American households recycle, and many of those don’t recycle all that they could. It’s sobering to realize that 91% of plastics have never been recycled, and our ability to recycle paper is shrinking dramatically. There’s an obvious need to search for other solutions to reduce our environmental impact. Especially since the ecological damage caused by non-recyclable insulation materials is increasing with the rise in home delivery of temperature-sensitive products such as food medicine, and fresh pet products.

Sandbag against a tidal wave

Americans throw away 2.5 million plastic bottles every hour, and recycling can only recapture a small amount of them. Including plastic, we discarded 22 million tons of recyclable products in 2015. Many consumers also prefer single-use items such as bottled water, a choice that poses a considerable challenge to waste reduction. The U.S. government is slow in helping to minimize plastic production. Refusing to sign a pact approved by nearly every other country to reduce the flood of plastic waste polluting the globe. Until recently, China was the destination for a substantial amount of recyclable plastics from the United States. But, China recently began reducing the amount it accepted, with a sharp decline of 67% from 2017 and almost 50% from 2018. China has now ceased receiving any of our plastic, or our cardboard. Vietnam and Indonesia also are enforcing strict controls on contaminants, making it a problem for recyclers to produce acceptable loads.

With the shift in the scrap export market, the profitability of residential mixed-paper recycling has disappeared. U.S. mixed-paper exports fell off by 40 percent last year. China is not the only door that has slammed shut; Taiwan, Malaysia, and India have banned the commodity altogether. Because of the collapse in the market for recyclable paper, many cities have discontinued their collection programs.

A large number of communities no longer offer pickups for recycling because the costs are too high. In those that do, many of the materials conscientiously placed in recycling bins are still sent to landfills because recycling companies reject many types of paper waste and containers. They cite the difficulty of separating recyclable pieces of the packaging as well as contaminated products.

To recycle properly, people must remove stickers, wraps, plastic cards, wash containers, and separate each component of the package. Those tedious tasks cause even the most ecologically educated home-sorter to fall short, leading to many of the items sent to recycling ending up becoming trash anyway.

Recycling is far from the only or even the best way to reduce our environmental impact. We can attack the problem from many sides, first by reducing carbon dioxide (CO2) emissions. The use of fossil fuels in manufacturing and transportation adds to the carbon footprint of many products. Innovative design using components that decrease fuel usage in fabrication and shipping is a step toward remediating global warming.

Packaging designers must avoid using materials that claim recyclability but are realistically destined to end up in landfills or litter the oceans. Although some have turned to paper-based insulations in an attempt to do better, they still face the challenge of recyclability in many cities due to the collapse of the recyclable-paper market.

Many cities, counties, and states have taken steps in the right direction to institute bans on Styrofoam®. While environmentally conscious companies that want to reduce their wasteful footprint by eliminating Styrofoam® coolers still have the challenge of having to ship their perishable products cold.

Since the environmental damage caused by non-recyclable insulation materials is increasing exponentially with the rise in home delivery, shippers of temperature-sensitive products need a better answer. With the ever-increasing collapse of the recyclables market, a fully compostable cooler is the simplest and most economical way to meet the growing demands of mail-order food, medicine, and fresh pet products while mitigating our impact on the environment.

Illuminate has combined its extensive knowledge of thermal packaging-protection with its love of the environment to create Ecochill. The fully compostable coolers have a minimal impact on the environment by using a sustainable natural material that does not need much water or energy to manufacture it.

Ecochill coolers can be used to safely transport a broad range of temperature-sensitive perishable goods such as food, pharmaceuticals, meal kits, and animal food and medicine without generating more waste or a false impression of recyclability. The Ecochill coolers are fully compostable at home, in a commercial composter, can be reused as mulch, pet bedding, or simply break down naturally in a landfill. Contact the experts at Illuminate today to create a greener cold chain. 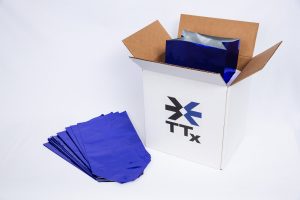 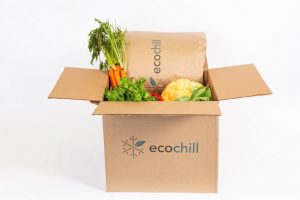